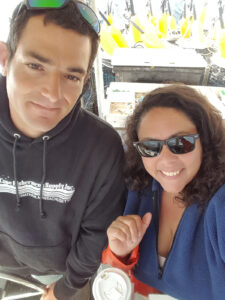 Chatham Lobsters is a family business, and Brock Bobisink & Faye Anderson come from a long line of commercial fishermen.

Brock is a 25 plus year commercial fisherman with a B.S. in biology. At a very young age his grandfather, Charles Peluso, instilled a love of the ocean and fishing in Brock. His grandfather, best known as “Tiggie”, spent over 60 years as a commercial fisherman on Cape Cod. Tiggie’s career spanned the decades from dory fisheries to high tech fisheries that emerged in the late seventies when fishing was in its heyday. Tiggie’s career was chronicled in his autobiography, Tiggie the Lure and Lore of Commercial Fishing.

Many of Brock’s younger years were spent working alongside his grandfather’s different commercial fishing ventures. Also, when Brock was growing up, his mother owned a commercial fishing boat and completed a master’s program in marine science and policy. So it was only natural that Brock followed in his family’s footsteps. He was an exchange student at the University of California fishery program while getting his college degree in biology. Brock has worked in multiple fisheries over the years. He has experience from ground fishing, to tuna fishing, shellfishing, and now lobstering. From his earliest memories as a child working alongside his grandfather until now, it’s always been about fishing.

Like Brock, Faye and her family also have a history in fishing. Faye’s father Michael Anderson has a 50 plus year career in all different types of commercial fishing. Michael’s long career in the fisheries spans from long lining ground fish & dogfish to harpooning tuna fish with always a bit of shellfishing. During his years of fishing, he was featured in National Fisherman magazine and was the subject of a documentary Longlining on the Bad Dog. Her father was one of the original board members of the Hook Fishermen’s Association and for at least the past 10 years, he has been a pier host for the Fishermen’s Alliance at the Chatham Fish Pier.

Faye has helped or worked as a mate for her father on and off over the years while pursuing her main career of becoming a metal sculptor. Faye’s business, Funktional Steel Art, merges her love of the ocean and fascination with the creatures that live there with her desire to express that love through an artist’s lens. Over the years she has been hired to design and produce awards for commercial fishermen through the Fishermen’s Alliance and other organizations. Although metal sculpture has been her main passion over the years, Faye has always held and used commercial shellfishing and fishing permits to keep close to her family ties. Over the past few years she has worked alongside her fiance Brock on their commercial lobster boat the F/V Loon Cry.

Like many other children of commercial fishermen, Brock and Faye have enjoyed growing up watching their families and friends working at the Chatham fish pier and continuing this tradition. Hopefully this productive and rewarding way of life will be appreciated and maybe followed by their son Ethan.